IDE 11.0.1 - How can I deactivate CSS code intelligence on semicolon

Using Komodo IDE 11.0.1 on Windows 10. Whenever I edit a CSS file and finish a line with a semicolon, Code Intelligence pops up with a list of accepted declarations, the first one being -moz-appearance. If I press Enter to get a new line then -moz-appearance: is instead added to the file and I have to manually delete it. Is there any way to prevent Code Intelligence when I type a semicolon? I still want to keep it so that if I start typing max-w it should suggest max-width:.

Note that this only happens when Code Intelligence has no suggestion for the value of the current declaration or if I select something other than the suggested values.

I have tried starting Komodo IDE with the default settings but I am still faced with the same behavior.

The official release will follow in a few weeks.

It should have been fixed in 11.0.2. Are you still seeing the exact same behaviour?

Yes, in fact that’s why I looked at the forum last week. 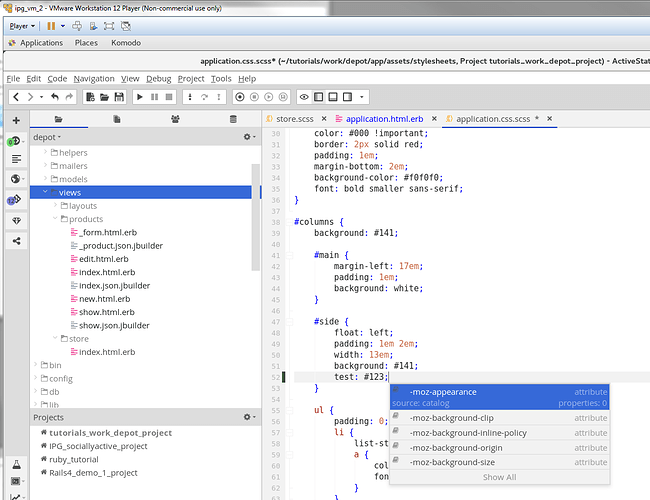 You can just drag it onto the reply area I believe.

Does this happen in safe-mode also? Help > Troubleshooting > Restart in Safe-mode.

I can confirm that this is still happening for me in 11.0.2 as well. Exact same issue and behaviour, and the issue persists in Safe Mode.

Hi guys, I wonder if can you remove this code intelligence after opening the curly braces too.

I want to open it and press Enter to continue adding CSS rules, then this happens:

Anything new on this ?

@trogne, on which issues? The semi colon issue should be fixed. I don’t know if @stramin filed a ticket for their issue with {.

No completions trigger after ; me. If you’re still seeing this issue please start a new thread as we’ll have to dig into specifically what might be going on in your case.

I’m seeing this issue with SCSS on the following build: