The Komodo 10.2.2 on Linux 64bit still gets slow after a while, and crashes very often. So much crash that I have to switch from IDE to Edit

and try to get used to Atom. Atom doesn’t have enough toy for me as Komodo, but…

I have no info what makes Komodo IDE crash so that I can file a bug report. Myth…

Are you sending in a crash report when it crashes? You might want to try resetting your profile:

I use Komodo on Linux myself and am not getting any crashes.

Are you sending in a crash report when it crashes

As first, I enabled “crash report”. But after a while, when crash happens so often, I disable it, to let Komodo restart faster, so I can continue my work.

But did you send in crash reports? Please enable the crash reporter and when next you get a crash report it and write a comment saying what you were doing when the crash happened. Writing a comment is very important, without it it’s near impossible to act on these reports.

did you send in crash reports

Today I delete ~/.komodoide and /.activestate folders. It seems that Komodo is more stable now. I will keep an eye on it for several days and let you know later.

what you were doing when the crash happened

I remember that when I switching to Komodo from other virtual desktop, it crashes.
I often organize my workspace like this: Virtual Desktop (VD) 1 for browser, VD 2 for Komodo and Terminal. I’m doing web programming and often switch between browser and Komodo. When I am in 1st VD, I click the Komodo icon on Unity Launch bar, Komodo crashes.

Sometimes, it just crashes when I’m typing on it. I remember that Komodo was slow then.

Note the ~/.activestate folder holds your license, you shouldn’t delete that one.

Crash comes back and I’ve just submit a report: 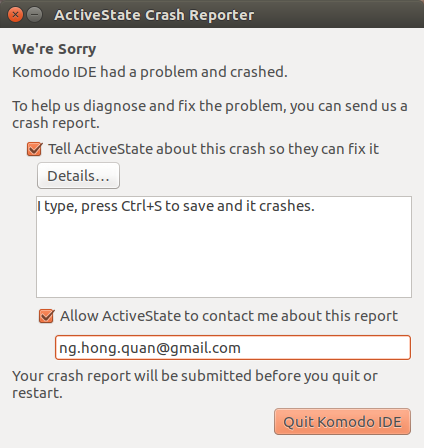 You appear to be getting this crash, originating from Mozilla:

See if running the following script intermittendly (eg. every 5 mins via cron job) makes a difference:

I added the crob job. But Komodo still crashes

We have a new nightly coming which may fix this issue.

@careyh can you respond here when it’s up?

@hongquan, I’m staging a new nightly now and it will be available around 12pm PST (in about 3 hours). Look for build number 89902 for IDE.

Here is where they will be when they are published:
http://downloads.activestate.com/Komodo/nightly/komodoide/

Less often than before.