Where in KOMODO can I set up the compiling language: I need AWK instead of perl now

Where in KOMODO can I set up the compiling language: I need AWK instead of perl now.

NEXT, how do I run Bash script from KOMODO ?

Where in KOMODO can I set up the compiling language: I need AWK instead of perl now.

I don’t understand the question. Please what your trying to do with Komodo and it might clarify.

NEXT, how do I run Bash script from KOMODO ?

You can run BASH scripts like you would a Perl or Python file in Komodo. Again, please explain your use case and I can probably help more.

For my first question, I think it’s clear enough. Instead of runing perl script in KOMODO I want to run AWK script.

Now for the second, I’m used to run Perl scripts via debugging with 9th button in the second row (titled Go). But “Bash” doesn’t allow debugging but only running. So I ask where can I launch run and not debug. I cannot find the appropriate button/place to run it.

It’s semi clear except that AWK isn’t supported by Komodo. You asked with such confidence that I assumed you meant something that was supported, heh. Unless, again, I’m misunderstanding your question/use case.

To run a bash script (or anything else for that matter that isn’t directly supported by Komodos main UI) use a Tool Box Run Command. 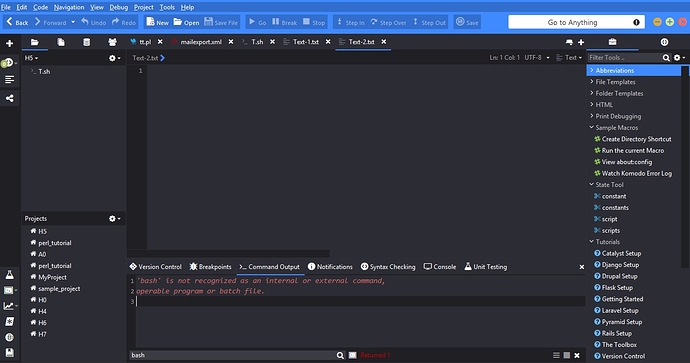 @max2, from that error it’s clear that you’re running Windows. There is no bash on Windows. I’m even less clear on what you’re trying to do now. You can’t run bash scripts on Windows unless you’re using a WSL shell.

You really need to explain your use case fully or I’m just going to keep guessing at what you’re doing and giving bad information.