"UNC paths are not supported" Help!

Hello. Obviously I am new to Perl and Komodo. I am at work, and am not sure if there are restrictions on my networked computer. I did a simple “Hello World” and when I ran the program, this was the output:
CMD.EXE was started with the above path as the current directory. UNC paths are not supported. Defaulting to Windows directory. Can’t open perl script “Hello.pl”: No such file or directory
Press any key to continue…

Please provide exact repro steps. There are at least 3 different ways you can run a file in Komodo depending on what version and type you’re using

Please also include what version of Komodo you’re running. 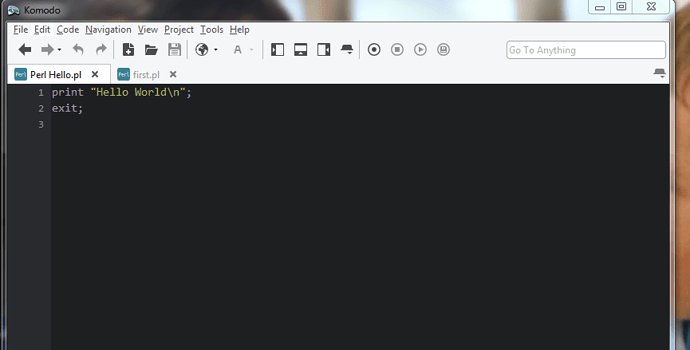 Notice that komodo color coded the words “print” and “exit”, which are commands in Perl, and the “Hello World”, a string in Perl, in two different colors so you know which is which! Generally all commands are colored in that shade of red and all strings are colored in blue.

That’s configurable. See Preferences - Fonts & Colors (be sure you have “Show Advanced” checkbox checked if you want to change these colors only for Perl code).

Thanks for the thorough repro. It’s really helpful but you seem to have left out the key piece of information. What is the path that you explicitly set in the second step 5 above, in the Run Command dialog? Is it actually the UNC style path? Or is a standard Windows path, eg. C:\path\to\file.pl.

If it’s the former (the UNC path) you likely need to mount whatever that remote drive is to a local letter drive. Something like this tutorial does.

You have a typo in your command also. Looks like you typed per rather than perl.

You could avoid all of this by no setting “Start in” and using the Komodo Command shortcuts to construct your commands when you can: http://docs.activestate.com/komodo/9.2/shortcuts.html#shortcuts_top

You could run your command like so:
%(perl) %F

Let us know if that helps.