Is there some way to fill the remote files tabs with another color?
Or may be another way to apply some difference exists?

Would you mind filing an enhancement request for this? https://github.com/Komodo/KomodoEdit/issues/new

I think it’s possible to change background color of “remote” tabs, at least there’s a macro/userscript which does it but for different languages. The SDK provides such a good API for making a lot of interesting things.

Would you mind filing an enhancement request for this? https://github.com/Komodo/KomodoEdit/issues/new

The SDK provides such a good API for making a lot of interesting things.

That’s too cool for me

Thanks, Defman. I think that feature will be usefull not for me only.
That will be really useful for tabs navigation when you’re working with local and remote files at once.

Ive bin playing with a userscript to achieve this.
Got it working with a small userscript, triggered after file open:

That’s ok. Personally me don’t have needs to restore the files via SFTP session, for example, on Komodo start.
I’ll try the script today. I’m wondered that it’s so simple. It’s necessary to RTFM how to use the userscripts in Komodo for the beginning. I’m new in Komodo

But as far as I understand the script should be active during all Komodo session (starts on Komodo load). Am I right?.

You can add the userscript in the toolbox, by add -> new userscript and than in the tab triggers select the after file open trigger. 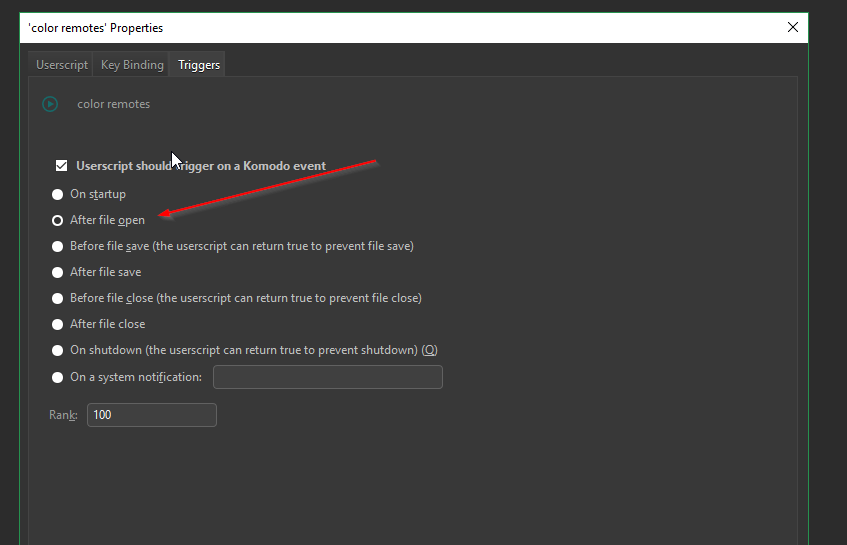 Thank you very much. I hope that will be helpfull to somebody else, too.

babobski
Have the case to check the feature in practice today. Near dozen of opened tabs, one same file opened localy and via SFTP between them. The chance to entangle the files is real, but the dark green tab make this situation absolutely unavailable

Great and simple visual improvement, thank you once more. May be the guys include it in some future release if it’s so simple.