When I not check “Debug in separate console” in Project Preferences
and run this file in “Debug Output” I can type:
200 100
Ctrl-D
and output will be:
‘Average is 150.0’ 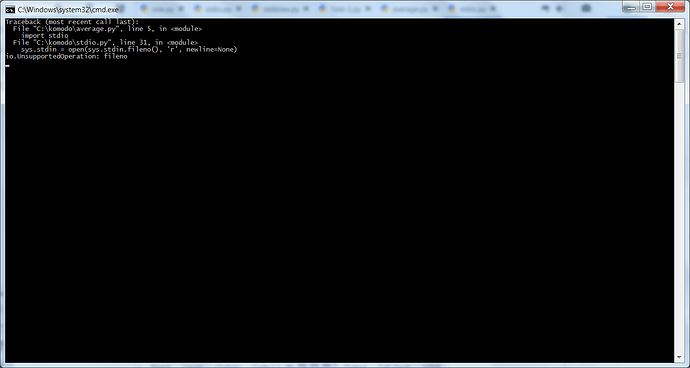 This error I can get in my Macbook too.

Is it a bug in Komodo IDE?
Thanks!

He’s able to reproduce the issue on OSX as well. It makes me thinking that the problem is in the code though.

@Andrewd, are you able to reproduce the issue by running the script using python3.exe average.py?

In Python 2.7 (Language: “Python” in Komodo’s Project Preferences) it’s OK - I can see console without errors after running this script.

I guess Komodo changes the sys.stdin object when you’re using “Debug in separate console” so this is why your code does not work. IDLE has the same problem:

It does indeed change your STDIN for debugging purposes, nice digging @Defman. I don’t think this is something we can easily fix on our end. Is there a reason you can’t debug the code from within Komodo?

I’m just learning Python from Sedgwick’s book. I can debug the code from within Komodo, but for graphic output I need separate console. THE BEST PYTHON IDE will be much better with such functionality. Аgain, it works in Windows for Python 2.7 (Language: “Python” in Project Preferences ). I get 3 different results on Mac for such configuration: