Confusing UI. Not Intuitive. Although 9.3’s SCC UI was simple, 10’s is horrid.

I have no idea what its doing, most of the time. I like the left side status, indicating that I have items to commit, but after that its a half baked UI.

It fails to add untracked files to my git WC. SCC locks up frequently. The UI offers little to no insight into what files I;m committing or adding. Right click context only.

Seriously - this looks like a completely unfinished or broken feature. As a paying subscriber, I expect better. I can find free SCC apps that are several orders of magnitude better that the SCC integration is Komodo IDE 10.

Not sure what went wrong in delivering here, but for the first time in 8 years I have a increasingly long list of complaints about the product.

Failing to add untracked files is a bug, it has been fixed in the latest nightly:

As for having to use the context menu’s, that’s really no different from before. The only real difference there is that we made the menu items more consistent and more specific to the VCS that you use.

Aside from the bug you ran into I don’t really see any of the issues you raising being new ones, those were all issues in version 9 as well. Version 10 makes strides to address them, but it’s not complete. We will continue to improve on this UX as we release new versions. 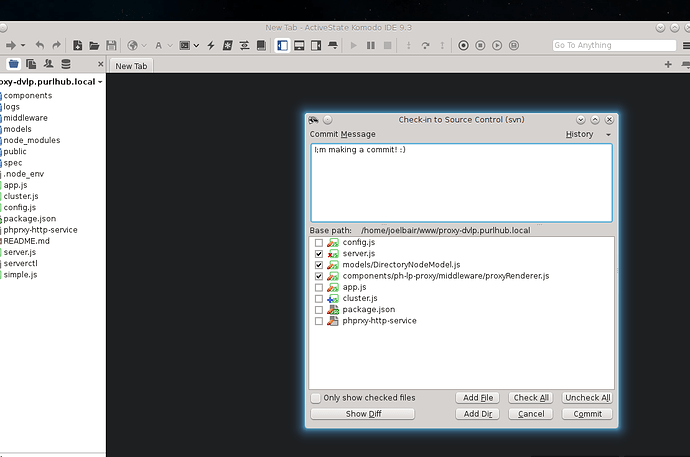 Clearly a more complete UI. As many of us are accustomed to, I can left click things, to select. And what I’ve checked is indicated clearly. I have the option to view a diff. Although I wasn’t expecting multiple checked files to be included in the diff, and the highlighted selection NOT included. In fact, I would have presumed the opposite. And why would I want to only show checked files? Then how would I check any more files? Still… I have a complete set of utility actions on the bottom right. I can work with this… 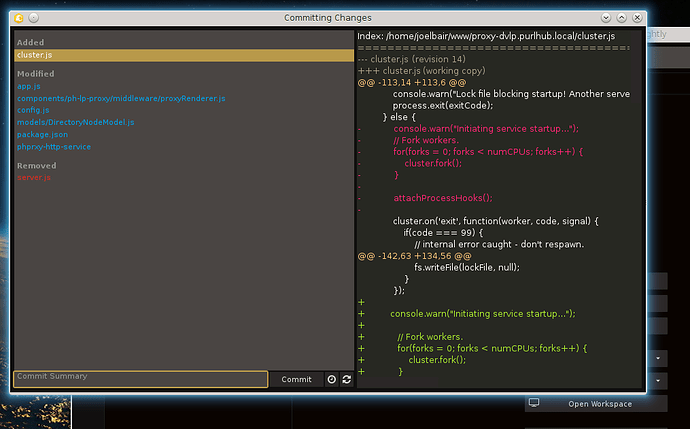 Yep. This is it. The primary UI dialog opened when selecting SCC -> commit.

Different, YES. Better… I’m not so sure.

All of the options present in the old dialog exist in the new. Except for add dir and add file, which is meant to be done through the editor itself. You can double click or right click files just as you would before. Upon selecting files they will be added to the “Committing” group.

I appreciate that you are not a fan of the new design, but please give it a chance and let us know once you have accustomed yourself whether you still have issues with the dialog. It seems your concerns are primarily based on first impressions and not on actual use of the dialog.

Note this is a brand new UX and as such it is likely that improvements are still to be made. UX is not something you can always get right on the first try, it needs iteration and feedback.

@nathanr Thanks for quick the followup. This is intended to be feedback. Albeit loaded with sarcasm.

The check boxes in 9.3 - pretty dead simple. Pardon my 2 cents here; But it is a curious aspiration, to muse: “Those damn checkboxes confound and confuse people. Lets build a better wheel there…”

Now that you mention it, I see that double click and right click are supported. Although it was not at all clear that I needed to do any of these things in order for the function to work, as the dialog simply visually appears as if “these are my changes - commit them”.

Also, why is there a cursor, and a line highlight in the right side diff sidebar? What is that for?

Thanks for pointing me in the right direction regarding the SCC interaction. Please take these criticisms constructively. My brash sarcasm is intended to point out that from a new users perspective, trying out your new UI, its not terribly intuitive - here are some big areas for improvement.

Thanks for the hard work you and your team have put into developing Komodo IDE.

The check boxes in 9.3 - pretty dead simple. Pardon my 2 cents here; But it is a curious aspiration, to muse: “Those damn checkboxes confound and confuse people. Lets build a better wheel there…”

Fair point, I’ll bring them back.

Also, why is there a cursor, and a line highlight in the right side diff sidebar? What is that for?

That’s just the way scintilla works atm. @mitchell can we make it not draw a caret and line highlight when it’s in read-only mode?

It isn’t, you can add as many lines as you wish. The height of the textbox doesn’t convey that well, duly noted.

Thanks for pointing me in the right direction regarding the SCC interaction. Please take these criticisms constructively. My brash sarcasm is intended to point out that from a new users perspective, trying out your new UI, its not terribly intuitive - here are some big areas for improvement.

Constructive feedback is always much appreciated. Unfortunately sarcasm doesn’t always come across well in writing and often gets interpreted as passive aggressiveness, fwiw. I’ll interpret your tone as sarcastic…

Thanks for the hard work you and your team have put into developing Komodo IDE.

Thank you for taking the time to share your feedback with us, that’s by far the best way to help us make the product better

@nathanr Yes we can hide the caret and selections for a “read-only” type of mode. There are Scintilla APIs for doing it.

@nathanr Either checkboxes, or some visual indication that I need to select some files. The problem I experience as an unfamiliar user, is that there is no “Committing” section heading until I add something. There is only “Modified” and/or “Added”. So it looks like nothing is missing on the initial view. Until you click commit. Then a popup error dialog says “No files have been checked”.

Checkboxes have the builtin visual state, either checked or unchecked. Which is convenient but that changes the whole UI dynamic you’re building here. Perhaps you could simply always include a “Committing” group heading, and place holder text just below “double click to add files” or something.

I also going to throw my vote in on one of your suggestion since I’m a user of Komodo as well:

I do not think checkboxes should be added back to the Commit Dialog. I think it can be made clear what the user needs to do in other ways.

Other than that, I agree with the other suggestions. Iterations to come.

For what it’s worth I was mainly inspired by git-cola when I created the commit dialog.

@nathanr - I hadn’t looked closely at git-cola previously. I can see the inspiration. Some of my comparative experiences were the git CLI, which is sparse but clearly informative. And somewhat unfairly, gitkraken - which is at the opposite end of the spectrum.

I agree with @careyh - checkboxes aren’t worth backpedaling on. @nathanr your UI could simply be enhanced as suggested. Having no exp with the git-cola UI, I wasn’t expecting a “committing” group to appear. Esp. with the dark theme, making those section headers a little more prominent and hint at require user actions.

Using 10 now for a little over a week, I’ve grown to appreciate the persistent diff on the right, that i simply single click an entry to change. The commit message box though, I need more space. Having my devious cat and all…

p.s. Are there new nightlys that I should try out ? Is there a notification channel I can subscribe to for nightly releases?

I agree on everything that’s been said. Fyi this will probably be for 10.1.