This leads to compiling error.

Thank you for your comments!

@surfactant, can you clarify the context that you’re running this in? Based on your previous posts I assumed you were talking about a Userscript in the toolbox but your example works fine there for me.

Hi @careyh Thank you for your reply!

Nothing special about the context. 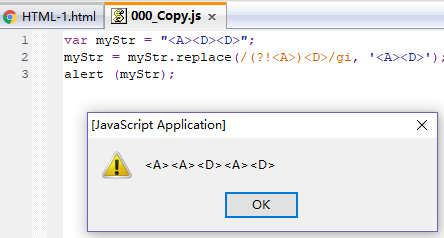 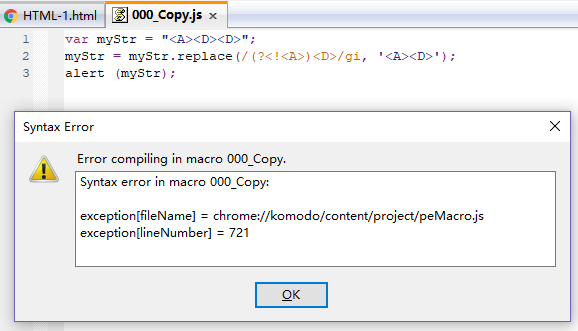 I wouldn’t say this is a true statement. Look behind assertions weren’t supported in JS until recently it looks like. May not have even been added to the Mozilla JS interpreter until 2019? Not sure.

Any way, we’re running on Mozilla under the hood and an out dated version so look behind assertions won’t be supported in any JS running within Komodo I’m afraid.

To answer your possible next question: no, we won’t likely fix it. This should clarify why:

Doubts about Komodo and XUL Discussions

I’m having big doubts about how much time and effort I should invest in learning to program Komodo. It seems that, whichever way I go, Komodo Edit won’t be adequate and I’ll have to program to fix its bugs and/or add even little features that are needed — like not losing my Places when the drive gets mounted, for example, which you guys will never fix. Fine. I’m not lazy—I can put in some effort. But I’m really worried about the whole XUL thing. I realize that Mozilla is throwing out XUL plugi…

Hi @careyh Thank you for your information! Let me add a temporary look-behind mark to get the work done.

I wonder what’s the industry-standard tool for handling large amount of html files. I mean something like Microsoft Word with VBA for doc files. Not sure whether here is the right place for such a question.

This sounds like a new topic. If you’d like to dig into that, lets do it in a new thread.