Hello. I wanted to verify that, having installed Komodo IDE (version 11.1.0 build 91033) as a Windows 10 admin user, I can also run the program when logged in as a non-admin user.

So I logged out of my admin account, logged into a non-admin account, and tried to run Komodo IDE. However, it prompted me to install a license (first screenshot, attached below). So I ran my old copy of the license installer program and was told that it successfully installed the license (second screenshot). But when I then tried to run Komodo IDE, I again was prompted to install a license. I logged into my online account and downloaded a fresh copy of the license installer (third screenshot). I ran it, again was told that it had successfully installed the license, and then was able to run Komodo IDE.

Naturally I assumed that the freshly-downloaded license installer would be somehow different from the older one that I had tried at first. But the executables are of the same size and, when I used the Windows “comp” command, it informs me that the files are identical:

Anyone have any ideas as to why the first installer file works and the second one didn’t, even though they appear to be identical? Is it simply two-time’s-a-charm? 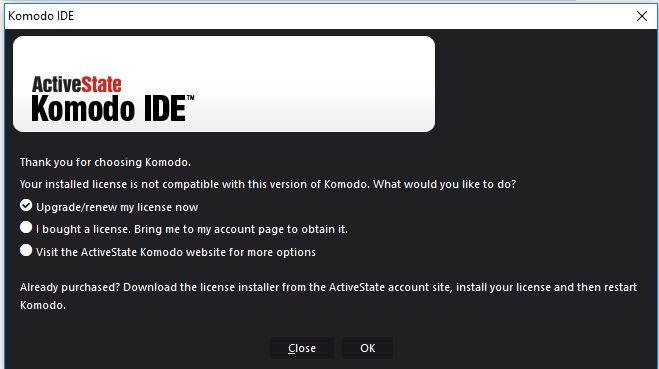 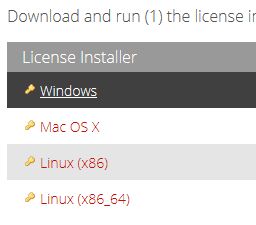 Try the work around steps from this post: https://community.activestate.com/node/15061

Hi, Carey, and thank you for that link. It looks like my scenario is closest to that second section, and its solution steps had worked. When I get a new laptop, I’ll first try the old installer file. If it works (which would be a bit baffling) then I’ll try the second one; and if that fails I’ll simply download a fresh one.

In fact, on that completely new Win10, I intend to try all my posted Komodo IDE issues and see if any are not reproducible, which in those cases would suggest they were caused by the cruft of a Win10 that’s been altered in countless ways. Of course, I’ll update the issues with anything I learn.