I’m hesitant to consider this a bug that’s why I didn’t go submit a report.
To ME, it certainly is, but I don’t know what the programmers intended.
It’s a minor issue in any case, but it seems that code folding places the section bottom pointer NOT at the actual end of the section but at the line directly above the next section.

Here’s a snip that shows it: 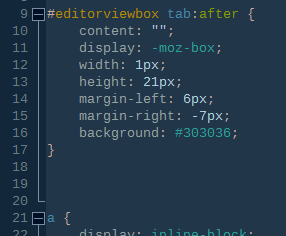 I will probably switch to the triangles as soon as I replace the default icons with ones that I can actually SEE with my dark theme (I’m not going to elaborate because anybody using a dark theme already knows what I mean).

And PS: I guess I quickly reached the limit for posts by a n00b here - kinda disappointing actually because really, 5 posts seems a tad conservative. I’m testing a new product I’ve never used, so naturally I have a fair number of questions to ask here! And honestly when this happened a couple days ago I actually considered just throwing in the towel. Not letting people ask all the questions they have is, well, unwise.

@DavidInvenio I’d say file a bug. That doesn’t look right to me either.

(I’m not going to elaborate because anybody using a dark theme already knows what I mean).

I’m using a dark theme and I do’nt know what you mean haha. Could you elaborate? Are you saying you can’t see the [-] and [+] icons? I see them fine but our eyes could be different.

They were visible but I had to increase the brightness on my workstation to get that screenshot. I’m still tweaking my color scheme adjusting levels to minimize contrast, but I definitely can’t work with the brightness up on my monitor. For the most part I’m not doing much that involves enough code to where the folding issues are a big concern anymore.