CSS completion is a bit too reactive

I don’t know what I am doing wrong again XD

A cute example for you to see. I merely pressed Enter several times after the opening braket to print this:

I understand that it triggers automatically after a column because it is waiting for a property value, but this is making me loose a lot of time.

If it is unavoidable, is it possible to make it so only the Tab key accepts the suggested competion, and not the Enter key, so I can go to a new line without loosing my sanity ?

Hi there, would you please report this on the bug tracker? The forums are not meant for bug reports or enhancement requests

Are you confirming this isn’t a misconfiguration?

If it is a bug or a missing feature, can you suggest something I can do in the meantime to use autocompletion with CSS ? I tried to bind the Enter key to the Cancel Completion action in the settings but it doesn’t do anything except making the Enter key enable to create new lines.

Thank you for your quick reply

On a side note, have you upgraded to 11.0.1 yet? It should have fixed some or all of what you’re seeing.

I have noticed this issue with both my Mac and my Ubuntu laptop. They should be more or less configured the same.

Are you confirming this isn’t a misconfiguration?

There is no configuration for this, so you could say so

I tried to bind the Enter key to the Cancel Completion action in the settings but it doesn’t do anything except making the Enter key enable to create new lines.

I’m curious as to what you did, there is no way to configure this at the moment.

You will find a screenshot below.

It is entirely possible “AutoComplete” doesn’t refer to the same thing as “Completion”, but you wouldn’t do something like this, would you? 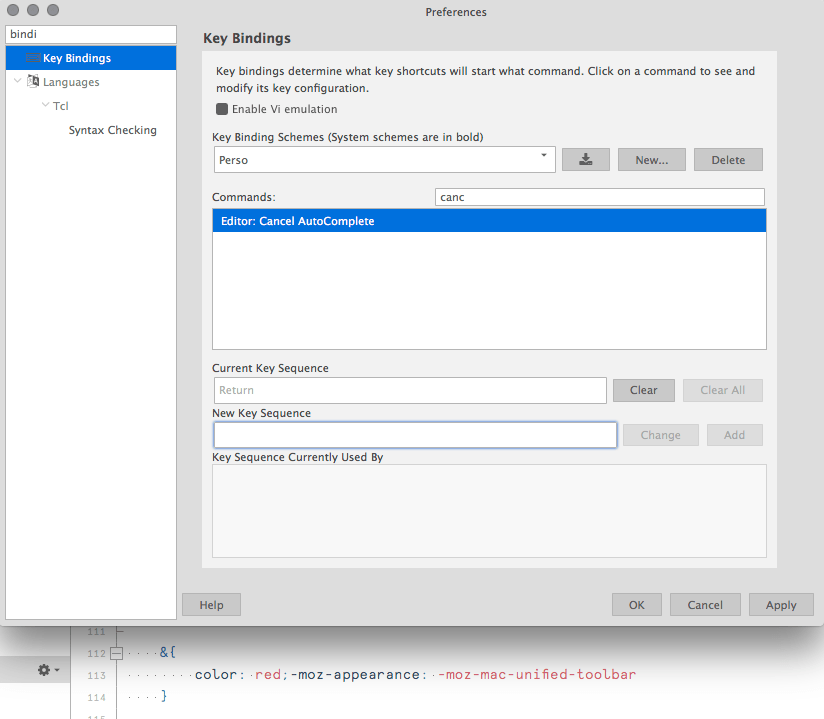 It doesn’t do what I was expecting it to do any way.

I see. That’s a command we seem to have overlooked when we implemented the new codeintel. As it stands it won’t do anything other than possibly throw an error. Apologies.