Noob feature request here – it would be really nice to have the color preview appear when we mouse over a color code (the feature is built-in to Brackets and Dreamweaver). Of course, accessing a working color palette would be fantastic, too. 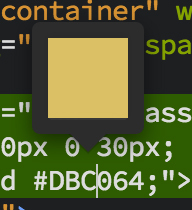 I love how, in Komodo, I can tab out of a completed element (ie: class=“container”) without actually adding a tabbed space between ‘container’ and the closing quotation mark – just a nice touch by the Komodo team.

Based on your advice, I tried using the Command key & Control keys separately – I’m not getting any response. Is this known to work in OS X?

On OSX you use Cmd+Hover. Depending on the type of file it may not work though. What are you trying to use it on?

I guess he’s trying to use it in a HTML file in style attribute of any tag.

That should work actually. But is he actually using a HTML file? Maybe it’s some type of templating language.

The problem may be just that I’m running a beta version of OS X here. I am glad the feature is included in Komodo Edit, though.

I just tried again with the linked file – no luck. But, you see what file I tried it with.
http://1drv.ms/1KpmAWE

I appreciate your input, guys.

I am running the El Capitan beta myself so that should not be an issue. I was able to get color previews for both colors in the snippet you shared.

So just to confirm a few things:

Do you maybe have hyperlinks turned off? Ie. Preferences > Editor > Smart Editing > Hyperlinks.

I am now; there was an update a few days ago to 9.2.1. Finally had a chance to try it again, and all of the color tooltips work in other files, as expected.

Thank you for your help, guys!