The View > Tabs & Sidebars menu does not currently give any indication – using check boxes (as are nicely utilized for the View > Toolbars menu) or highlighting – as to which of its tools are visible after any menu item is activated. This hampers the new user in learning as quickly as possible these parts of the interface, such as how the names on that menu correspond to the icons at the tops of the left and right panes, especially as those icons can get a bit lost in the plethora of toolbar icons above and the tool-specific icons below. Since the display of the left and right panes are intimately tied into the display of the tools within them, it may not be especially clear to the new user because the controls for displaying the two panes and the controls for displaying the tools, are separated from one another within the UI. Anyway, check boxes would be a welcome clarification to the user.

Checkboxes would not be the most appropriate in my mind. In my opinion this simply needs to be renamed to

That makes the intend clear and smoothens the UX. I feel adding checkboxes would just make things more confusing.

That would be an improvement, but I think the best approach is for the menu to actually indicate which tool is being displayed. Since each of the three panes can only show one tool at the time, I think that radio buttons would be even more appropriate than checkboxes. I don’t think that checkboxes (or radio buttons) would make anything more confusing, especially as the interface would then more closely match that of the View > Toolbars menu.

Also, as you indicated in your reply, it may be best if the menu label is changed from “Tabs & Sidebars” to “Widgets” and that terminology be used consistently throughout the UI and the documentation.

Widgets can be moved anywhere in the 3 panes so any 3 at any given time could be displayed. If we were to do this I think just a check mark to show that that widget is currently visible would be sufficient.

Ah. I was mistakenly under the impression that only one widget at a time could be displayed within each pane. Thanks for the info. So checkboxes would be best.

Nope, you can move widgets from one pane to another, stack widgets ontop of each other, pop the widgets or panes out of the UI. I personally stack Open Files ontop of Places so I can have both open at the same time. 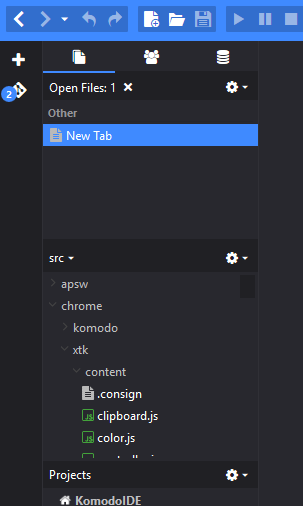