Switching to KoIDE10 from Ko09 ;; how to close panes without using keyboard 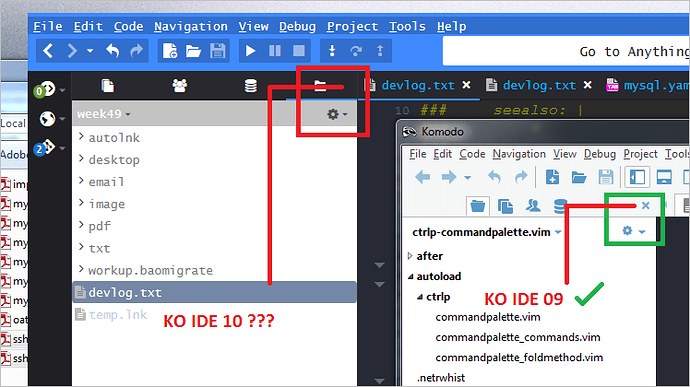 Hi, in the toolbar there are toggle buttons for the left pane, bottom pane, and right pane. Clicking on the left-pane one will toggle the visibility of the places pane.

Thanks for the quick reply.

Leaving a screenshot in case anyone else looks for this:

By the way I’m not sure if it’s intentional but you are using a different color scheme for your widgets than for the rest of your interface. Something to bare in mind, this functionality was added to cover certain use cases, but in most cases you’ll likely want the interface and widget color scheme to be the same.

Thanks for that clarification. It was not entirely intentional, however the shift in power and flexibility for GUI elements in K10 compared to K09 was a bit jarring at first, plus the default font size was a bit too small, so some sub-optimal tweaks were made in a hurry and just left like that.

For what it’s worth all of this (including font size) can now be managed from Prefs > Appearance.