I am getting a nul string when I am working with CSS, I I figure that it is due to the close bracket of an element ( } ) and it is causing an error. Do we know why this is happening?

Hi, when you remove those NUL bytes, how do they come back? When you type a ‘}’? When you save the file again? Something else? There’s not reason Komodo would insert NUL bytes into a document. It could be a misbehaving addon or userscript.

It is on a local linux server, which means that samba is involved. Here is what it looks like: 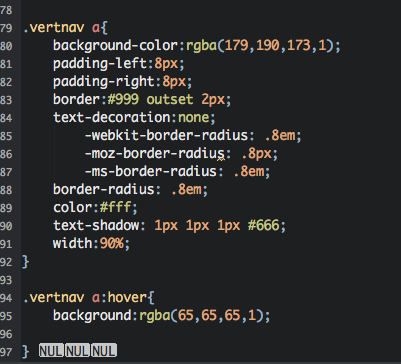 While Komodo is still functional, it is annoying.

The issue is not in Komodo, it is with the Samba server (see the link in my original post). To fix this you need to update your Samba server.