After upgrading to Komodo IDE v9.3.2 build 88191 (under MacOS X 10.11.4) I do not see anymore the global variable of the Perl programs I’m debugging. As you can see in the screen capture I’m in the midst of debugging a program with many arrays and hashes, but the “Globals” window is desperately empty. In the “Locals” window I see only one array. To see the value of a variable I have to use the “Watch” window and type the name explicitly, and still it doesn’t work when I use another variable as the index of an array. Is this a bug, or do I need to fix something in the Preferences? 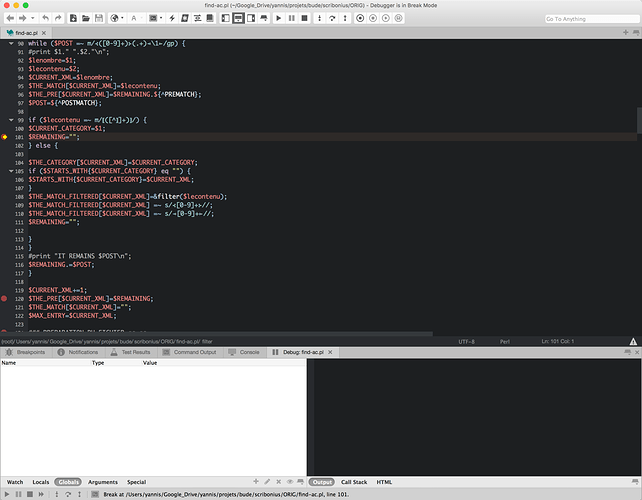 What version of Komodo did you upgrade from where this was still working? We have not made any recent changes to Perl debugging/

Do the variables appear in Locals?

Before that I was using Komodo 8 but now it doesn’t work either. Only one variable appears in Locals, it is an array, and it is not local in the sense that it doesn’t appear inside a function. Maybe the fact that variables do not appear is due to some other reason than the upgrade? I haven’t used Komodo for some months so maybe something else happened.

Ok sounds as if this is not a new issue or a regression then. Would you be able to share a code sample which reproduces your problem?

You may find it crazy but here is what happened. I started removing code from my program and at some point, when only about 20 lines had left, the Globals suddenly appeared. Then I started adding the code I had previously removed, and the Globals remained. Eventually the whole code was there and the Globals were OK. Then I closed Komodo and re-opened it, and the Globals do not appear once again. Do you have an explanation? Is there some trace file I can send you?

Can you consistently reproduce the issue with those steps?

If so, please report them on our bug tracker (including sample code):

GitHub is where people build software. More than 31 million people use GitHub to discover, fork, and contribute to over 100 million projects.

Trying to prepare a reproducible error I realized that it may be a memory problem. One of my Perl variables contains a text string of 647,762 characters. Is it possible that because of this large value Komodo does not display any variable? If so, what can I do to bypass this problem?

Hi, Komodo’s code intelligence will not scan files greater in size than 1MB. It appears your file has exceeded that limit and there is no workaround.

Well, my file is quite small (about hundred lines of code) it is the data stored in a variable that amounts ~ 650kB. The question is: why cannot Komodo show just the beginning of the data stored in the variable? Is it normal that nothing is displayed in the global variables tab just because one value is big? Is there a way to prevent displaying a given variable among the global variables, so that I can monitor the remaining variables?

The line count is not important. It is the file size. Komodo’s code intelligence will not scan files 1MB in size or more. The fact that you have a variable assigned to a long string doesn’t matter either. If you deleted all lines except that one, does that variable show up in the code browser? (Try with a new Perl file.)