I’ve been poking a bit at Komodo version 10.0.0-alpha1, build 88986 on my Mac where I have Komodo IDE version 9.3.2 installed. Yesterday afternoon it notified me that a beta1 build was available. I downloaded that build and installed it. The previous alpha1 build indicated that it was licensed to a “beta user”, where the current pre-release build asking for a current license. 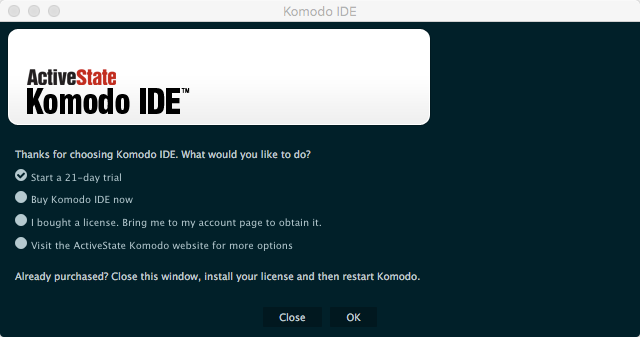 Well it says that it’s licensed to me (my 9 license).

Interesting. Mine is definitely not picking up my v9 license. We just recently renewed our annual licenses; when I get a few minutes later today, I will make sure the serial numbers shown on my account and in Komodo IDE match.

For now I’d stick with a trial, I’m not the guy who knows about license things a lot.

I think I forgot to update the siloed license, but it’s no harm since the 21 day trial should last you till 10.0 is released.

Makes sense. In the mean time, is there any way to make the trial license banner go away, so that it doesn’t take up that strip of real estate across the top of the app window?

It should go away on its own shortly after it shows, is that not happening?

Didn’t seem to go away. I was in and out of v10 for a couple hours this afternoon and it was always present. I will keep an eye on it over the next couple days.