I have this problem when intent create language extension of .haml, HELP ME PLEASE!!!

I’ve downloaded the package. Just drag’n’drop haml_language-0.1.1-ko.xpi onto Komodo window to install it and restart Komodo. Not sure if the add-on will works with Komodo 9 but I hope it will. Don’t build it for yourself until you have some experience in UDL, Python and Komodo add-on development.
BTW there’s a HAML syntax highlighting for Komodo created by Eric Promislow, a Komodo developer: http://komodoide.com/packages/languages/haml-syntax-highlighting/
Install this via Package Manager rather than trying to build the add-on you want.

I have tried install haml_language-0.1.1-ko.xpi but it was has imposible. No run perfect. Help me please 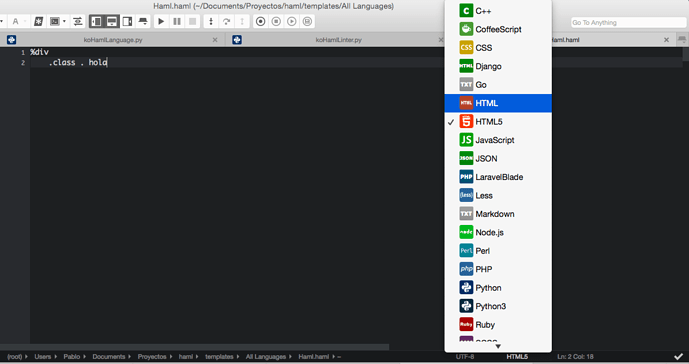 Instead I have tried development package language with UDL and it works, but show me error 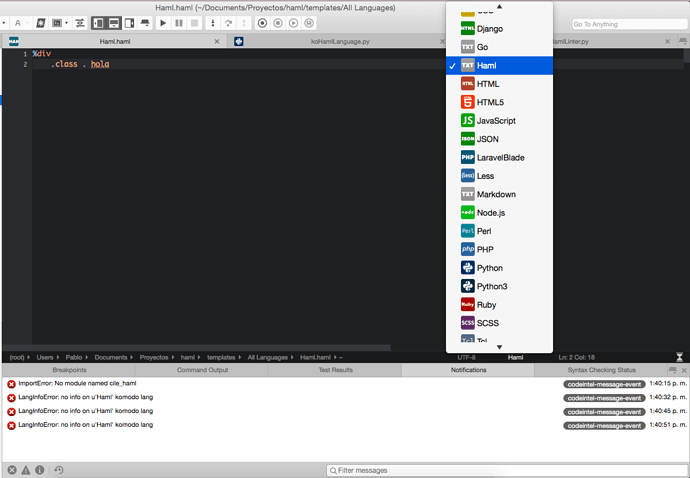 Please try that. http://komodoide.com/packages/languages/haml-syntax-highlighting/
I don’t know what is “development package language with UDL”.

It not work, I have tried but it not work

@mitchell can you say something on it? It’s a problem of the add-on but I don’t know what it means to fix it. (not a pro in UDL and languages structure in Komodo)

Ahh, nevermind. I’ll fix it manually, got the problem.

I’m not able to reproduce any of your errors using the latest nightly. Just ignore these errors.
The problem (I guess): https://github.com/Komodo/KomodoEdit/issues/286 (fixed)

Work? How. What is your versión KOMODO IDE? works it haml extension?

I am going to re-install KOMODO.

Just use the nightly. http://downloads.activestate.com/Komodo/nightly/komodoide/latest/Komodo-IDE-9.2.1-87651-macosx-x86_64.dmg

Do you work the haml code ckechers? I dont have the problem messages, but codelinter no work!

Seems like there are a lot of problems with the add-on. If I find some time I’ll try to fix some of the errors.