Assigning a key binding to be the current one

Hello, everyone. I created a custom key binding (using Edit > Preferences > Key Bindings), but that dialog does not seem to have a place to designate the new one to be the default, so I could actually use it. The documentation (http://docs.komodoide.com/Manual/keybind) states “To select a different key binding scheme, select Edit|Preferences|Editor|Keybindings.” But there does not appear to be any “Keybindings” subsection of the Edit > Preferences > Editor dialog. Does anyone know how we can specify a particular key binding to be the one we use by default?

There’s a dropdown menu where you can change your keybinding scheme. (In my case it shows “Enn”). 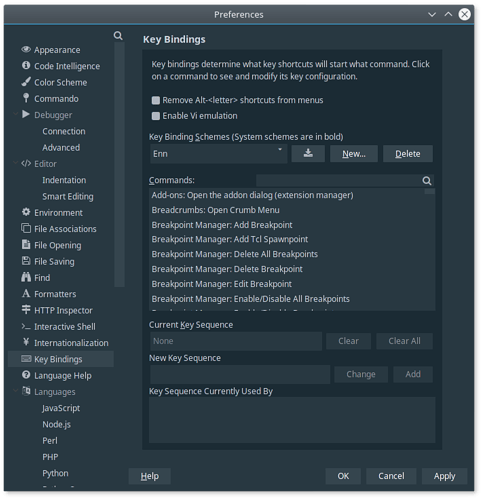 Thanks for your message. Now I see what is happening: It of course was immediately clear that that drop-down menu worked for specifying which key binding scheme one will be editing in the fields below it. But I concluded that it wasn’t the way to specify which key binding is the current one for actual usage, because I created my new key binding, assigned some keyboard shortcuts to various menu items, and even though my custom key binding was the one displayed in that drop-down menu, none of the changes were reflected in the shortcut hints displayed in the drop-down menus – specifically, for those menu items that I had set new shortcuts.

So just now I restarted Komodo IDE, and the new shortcuts are now shown in the drop-down menus. I should have thought to restart Komodo, but with other editors I’ve used the shortcut changes are immediately reflected in the menus, so I didn’t think a restart would be necessary. Anyway, thank you again for your reply!

A reasonable mistake! I filed an enhancement request to track this if we can get to it some time:

Thank you, Carey! I had intended to file an enhancement request after waiting a bit of time to see if anyone else had additional thoughts on the topic.

I’m relieved that the custom key binding scheme is in fact being enabled and used, as I have a set of key bindings that has evolved over the years and is now second nature to me.

heh ya I was going to say “File it!” but figured I could do it myself easily enough.